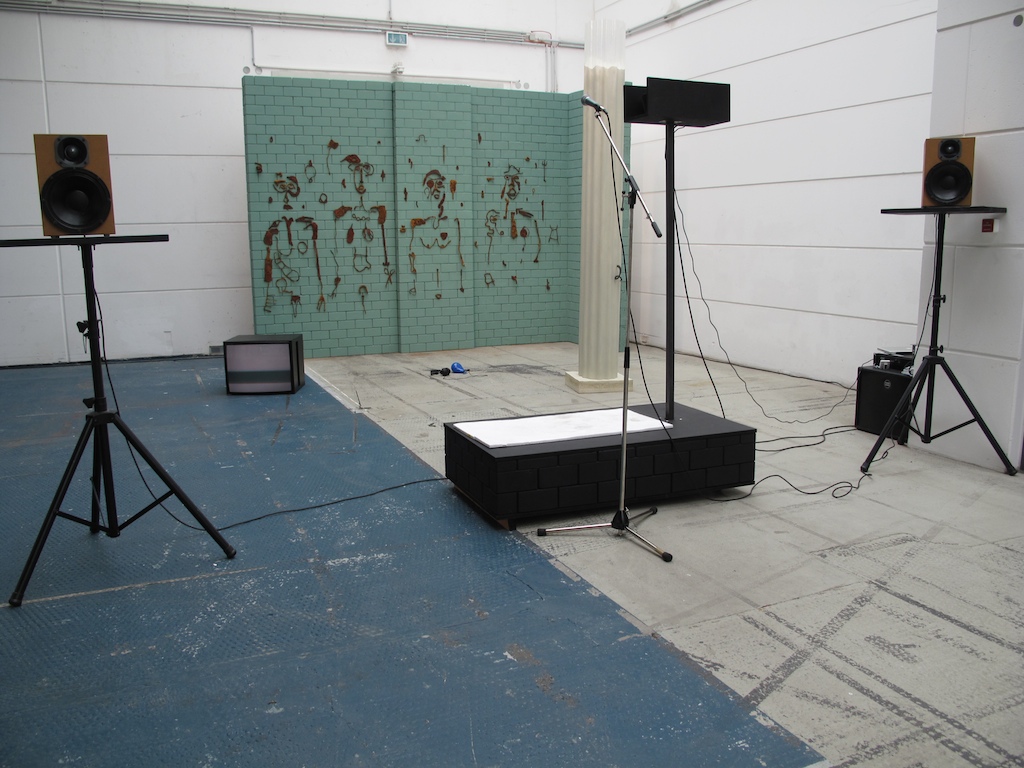 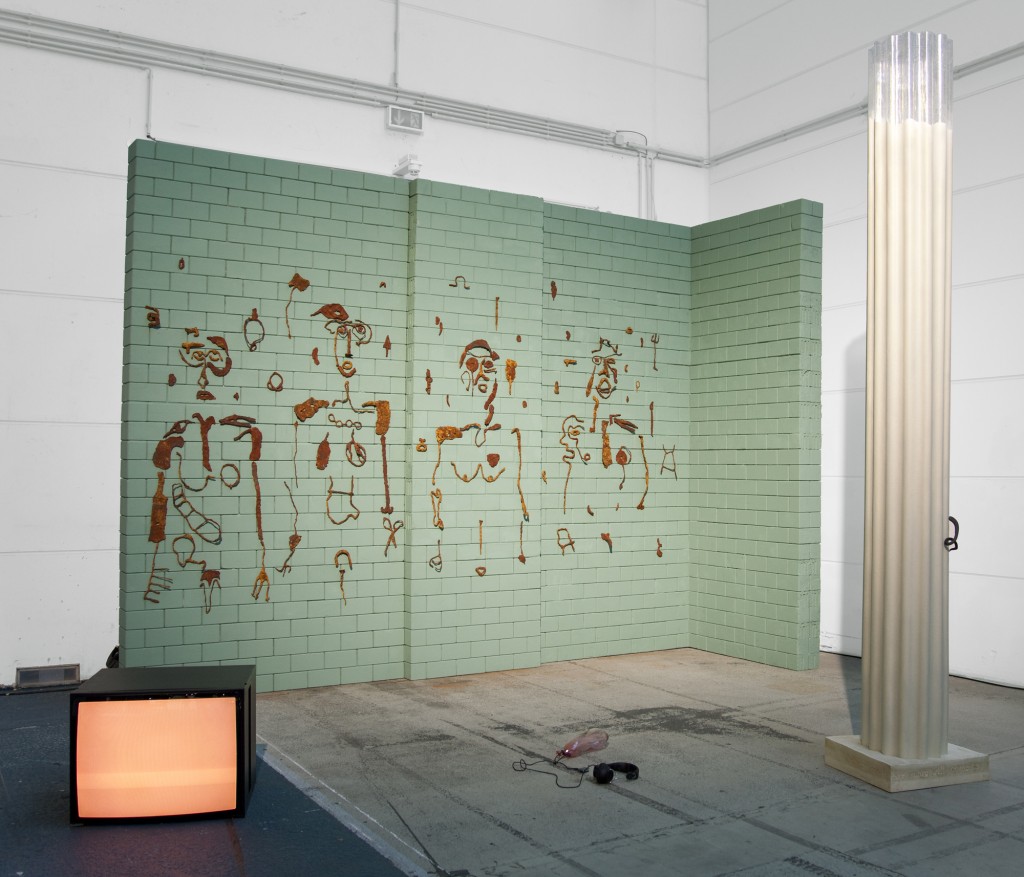 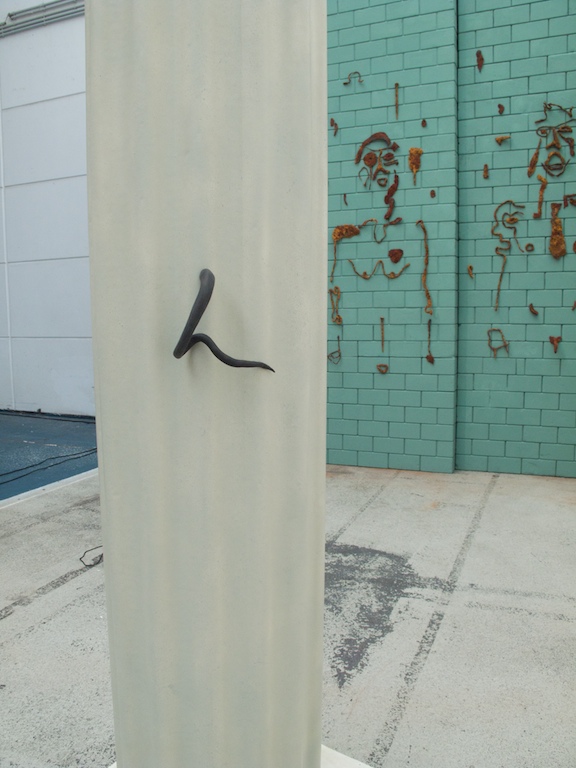 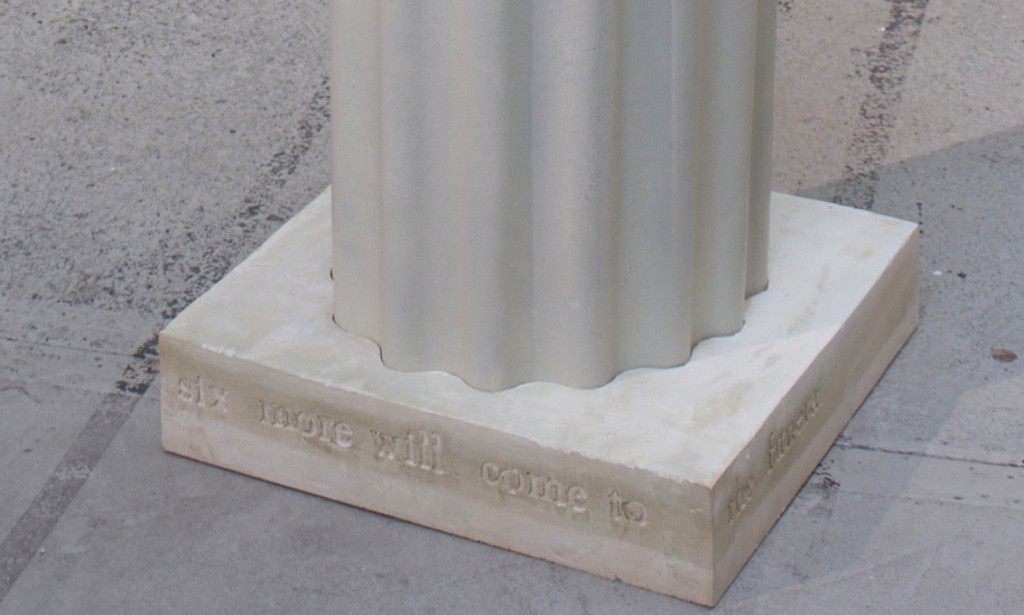 detail, 'Pull one out & six more will come to the funeral' 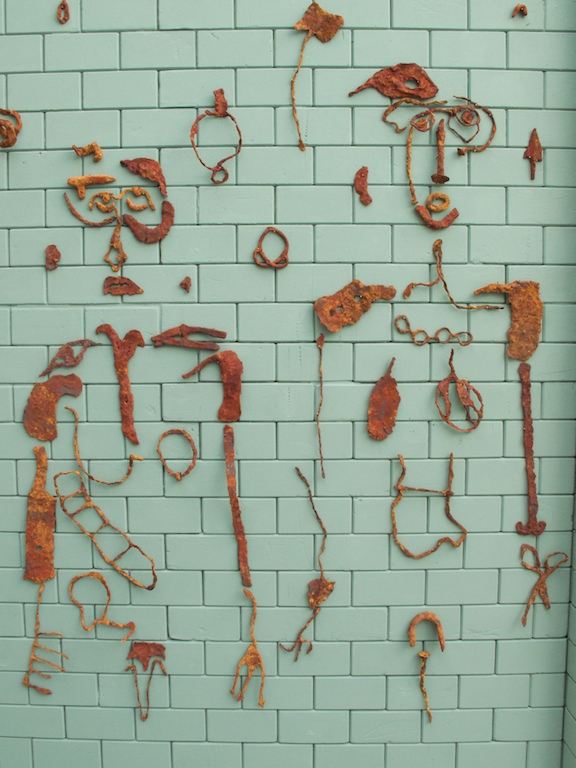 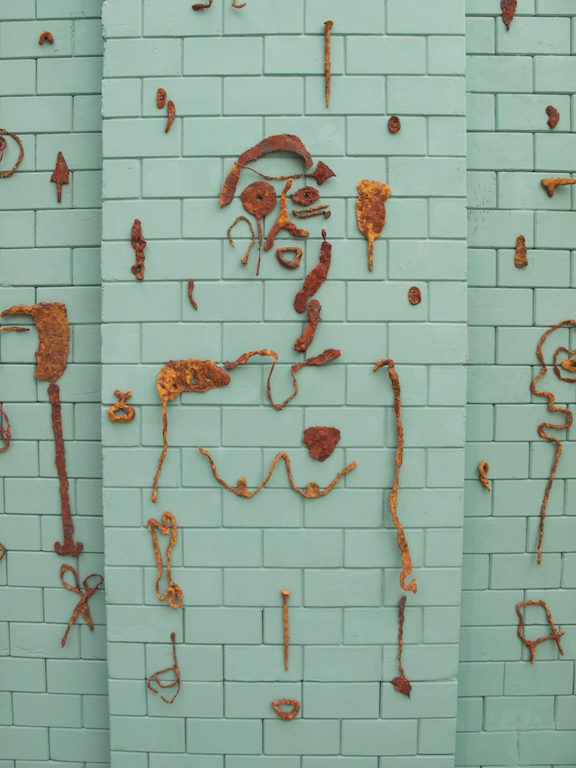 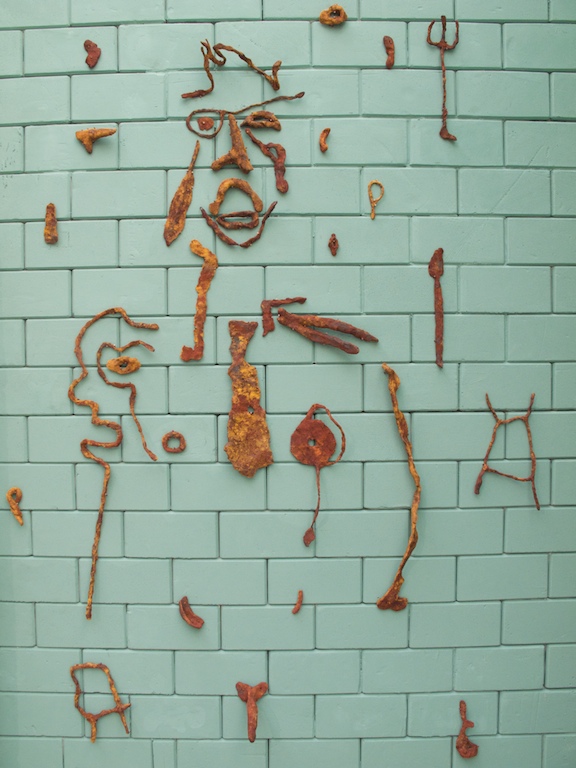 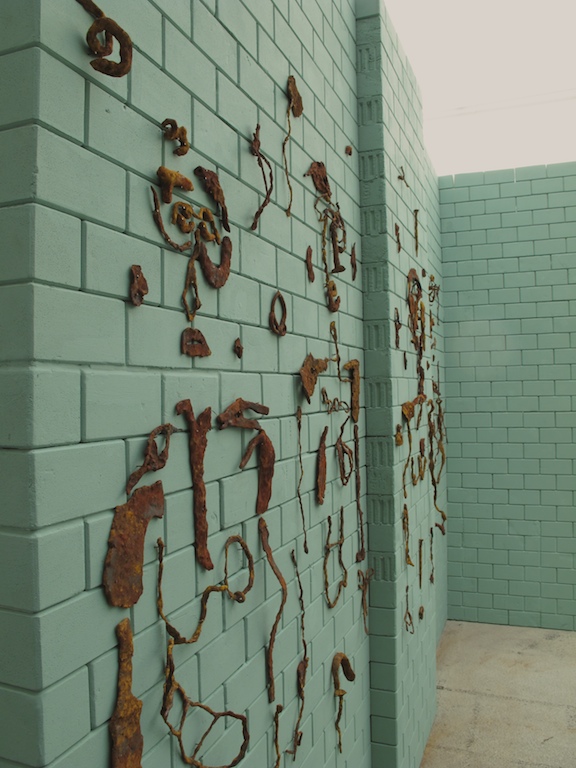 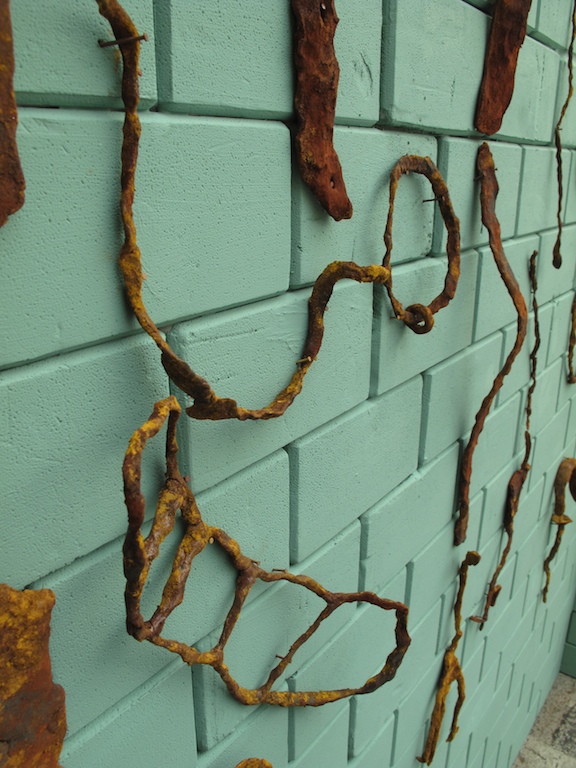 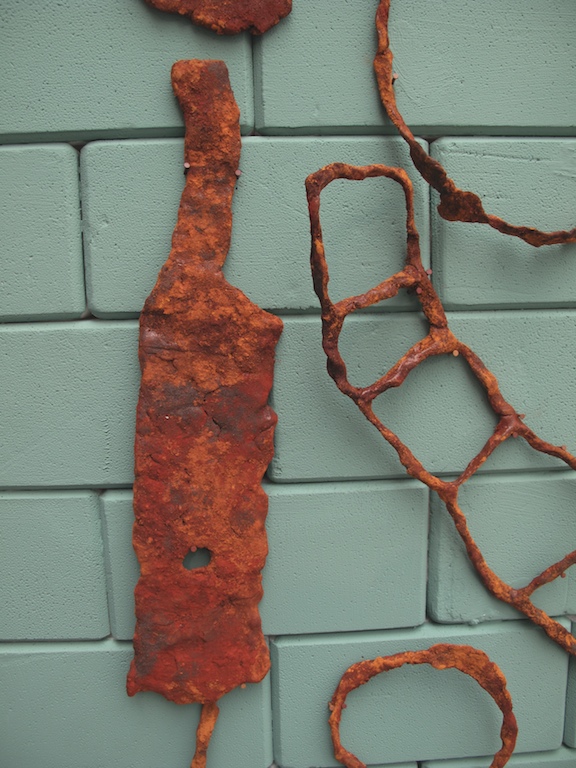 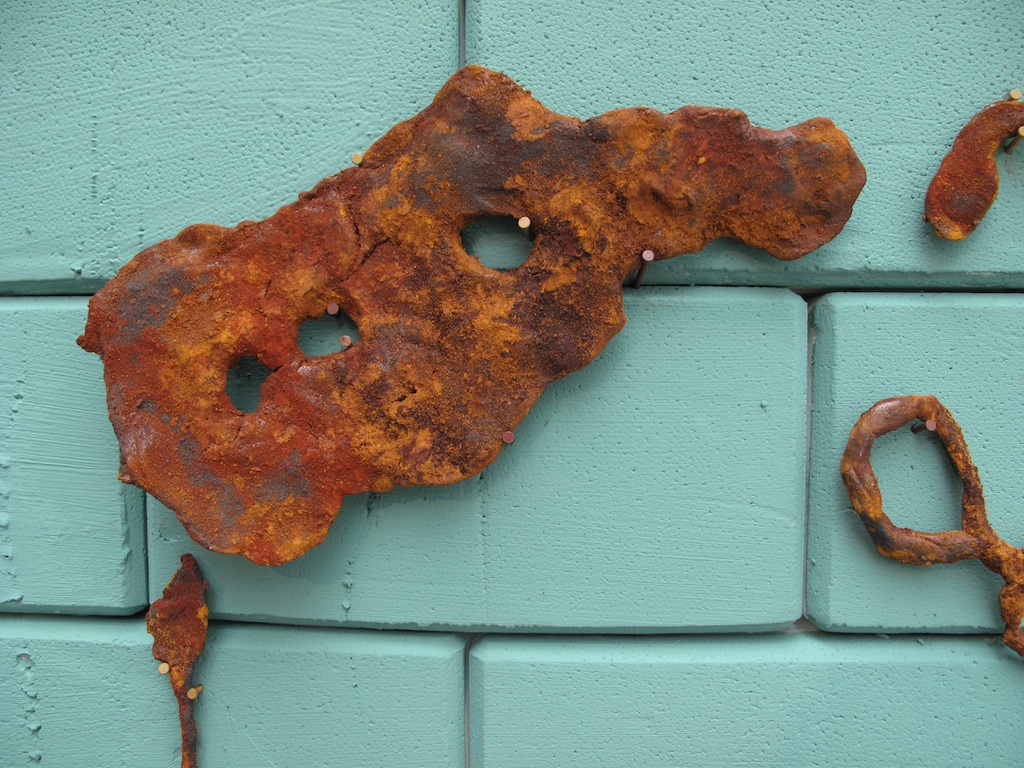 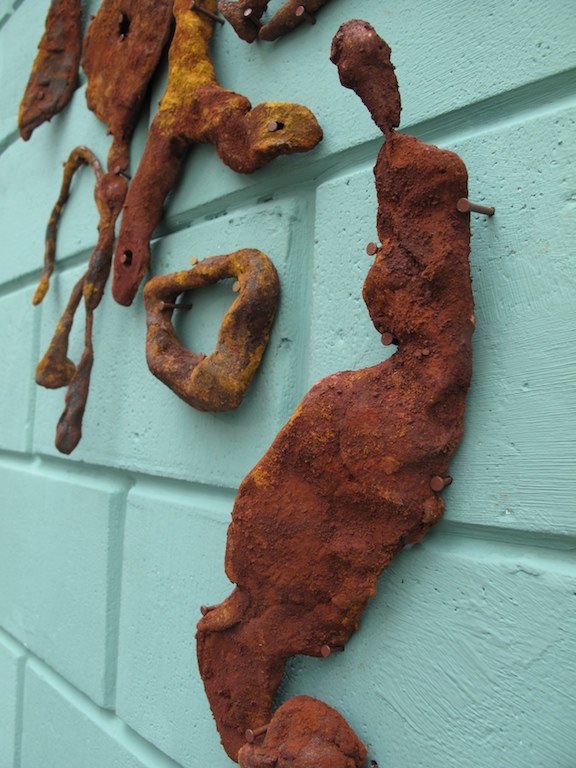 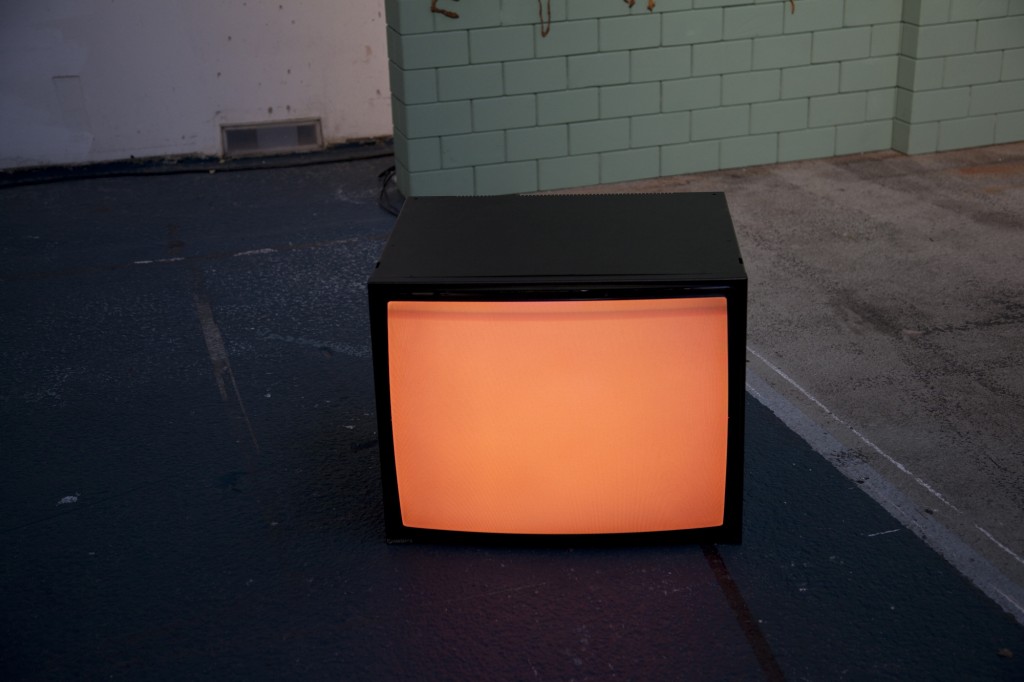 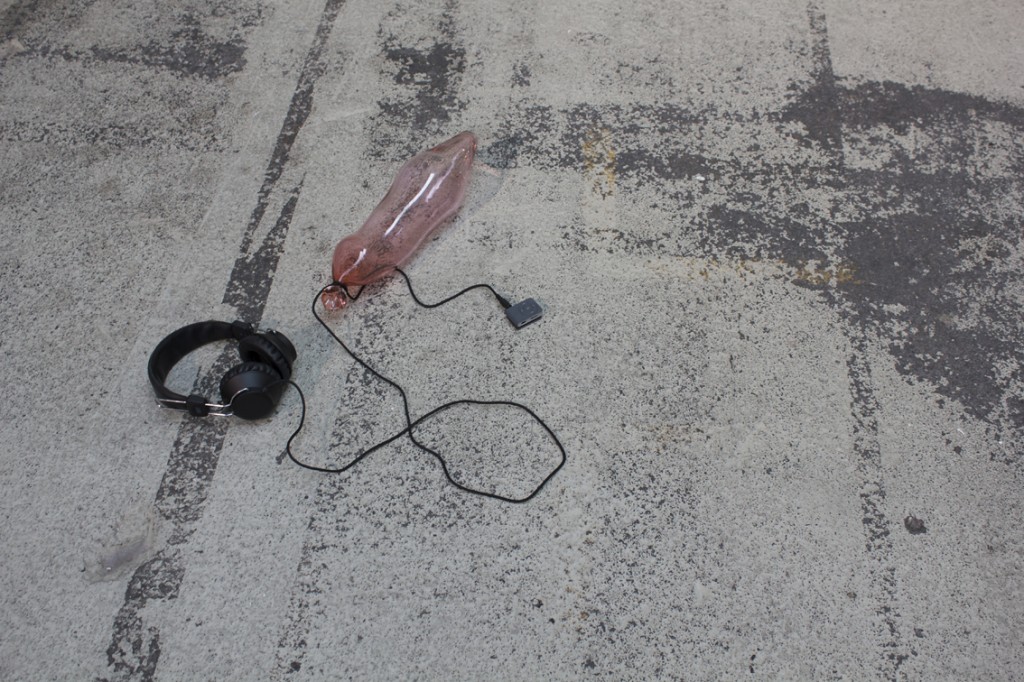 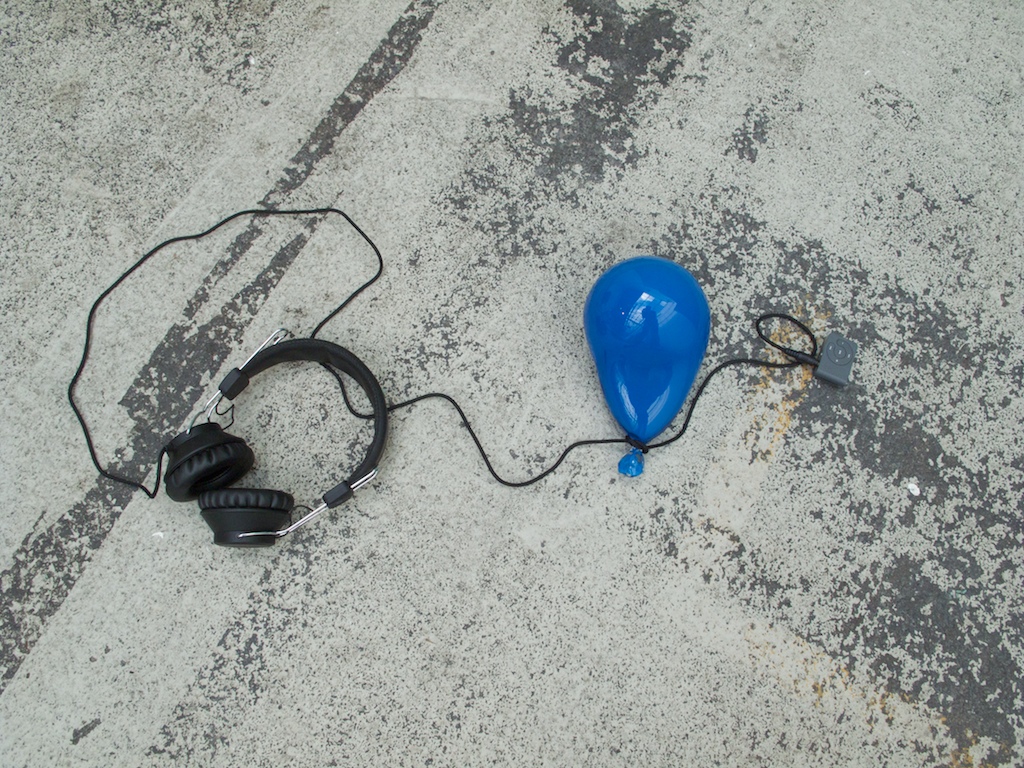 Death of a Shrimp from Kasia Fudakowski on Vimeo.

The works introduced under the auspicious title of ‘Pessimistinnen’, present a kind of gauge to the viewers own position.  The scale of pessimism on which each object can be found, stretches from the superficially optimistic, to the darkly fatalistic.

Everything is a counterfeit. From the dusty green walls made from Lego-like polystyrene bricks, to the half deflated, abandoned glass balloon on the concrete floor,  each object has been materially distracted from that which it represents. The rusty scribbles that hang on the wall in Basic forms of irony, suggestive of dug-up artifacts, are then over-enthusiastically re-positioned to warp in and out of recognizable human formations.

Anthropomorphism plays an equally large role in Pull one out & six more will come to the funeral, where a Doric column is simulated by half-painted, rolled up polyester roofing. The column is a ruin, reconstructed with an overlaying, ‘serving suggestion’ accuracy, reminiscent of flip books displaying monuments in past and present states.  One hair grows ostentatiously out of the column’s side, turning the column into some kind of body part,  a leg perhaps, and preserving the hair’s own existence with the somber warning cut into the base.

The comparatively joyful colour change from grey to pink, seen on a classic Hanterex monitor, immediately holds associations with early video art, colour theory and minimalism. The title; Death of a shrimp, however, serves immediately to remove it from this context as the viewer is obliged to contemplate the real phenomenon of colour change seen while cooking crustaceans. A kind of short circuit is created, conceitedly bypassing more established art historical connections.

The semi-deflated glass balloon connected to a set of headphones, lying on the floor, forces the viewer to crouch down and eavesdrop on a ‘sound exchange’ between two parties. Titled I’m really enjoying this, the audio presents two equally irritating/disgusting/personal occupations of people living within hearing distance of each other. The work pulls into question the limits of freedom, in that it is namely, limited by the freedom of others.

The performance that will take place during ABC follows through this pessimistic standpoint to an absurd level. A look at some world issues, accompanied incongruously by clichéd entertainment tricks, leaves the message appallingly open to personal interpretation. Depending on the viewer’s own capacity for pessimism, this Socratic irony attempts to reveal their position in a glass-half-empty type of examination.